On the third Saturday of May, in 1980. a thirty-year-old scientist named David Johnston headed up the gorgeous Toutle River Valley in Washington State, one of the prettiest places on God’s green earth. Johnston, who worked for the United States Geological Survey, had agreed to fill in that weekend for a colleague, manning an observation camp on Coldwater Ridge in the Cascade Mountains.

Although Johnston had earned his PhD just two years previously, his short career had already taken him around the country, and he was already considered an expert in his field. For the last two months, he’d been based in the Pacific Northwest, monitoring a troubling series of earthquakes and phreatic activity. He and his co-workers had been so alarmed by what they’d seen, in fact, they’d successfully lobbied to close the large, tourist-heavy Toutle River area to the public (a move that did not sit well with local authorities.)

After “making the rounds” that day, Johnston settled into his “home” for the next 24 hours – a small, well-worn camper parked on top of a mess of rocks, surrounded by piles of broken tree branches. Not a luxurious setting by any means…unless you factored in the location.

Spread out at Johnston’s feet was the kind of view that eats million-dollar views for breakfast. As far as the eye could see (and that happened to be mile after mile, from here), there was not a single man-made object.  Below his feet, the ground dropped away into a wide valley that was ringed by towering, snow-capped peaks. Everything sparkled in the sun like jewels: the silvery river threading its way down the center of the valley; the deep emerald-colored evergreens blanketing every square inch of flowing mountainside; the nearly sapphire-blue sky.

Although Coldwater Ridge was at an elevation of more than 3000 feet, and it was only the middle of May, the day was postcard-pretty – so warm that Johnston was dressed in his shirtsleeves and a pair of jeans.

The setting may have been gorgeous, but it wasn’t perfectly serene. For looming over everything, directly in front of Johnston and just 5 1/2 miles across the valley from his camper, was the Behemoth – the mountain that had drawn the USGS scientists to this spot with her recent rumblings and groanings. The mountain sported ominous new bulges on her snowy sides and had been blowing steam and ash into the air for weeks – until two days ago, when she’d gone deathly silent.

In previous centuries, the Indians had called her Louwala-Clough, or “smoking mountain.” Her modern, less-lyrical name: Mt. St. Helens.

Johnston watched the sun paint pinkish streaks on her western side as shadows crept up her eastern flanks. He watched her at rest, massive and solid and as immovable as Time Eternal. He watched and listened, and heard nothing.

Shortly after 8:00 the next morning, a mile underneath Mt. St. Helens, the huge rock plates that make up the earth’s crust shifted. A magnitude 5.1 earthquake ripped through the ground, triggering a massive increase in steam and pressure inside the mountain. As  the northwest peak of the mountain collapsed, 24 megatons of thermal energy were released – 50 times more than that of the atomic bomb over Hiroshima.

60,000 feet of heated ash exploded into the air and a few seconds later, a lateral explosion sent rock, ash, and 1300-degree gases hurtling towards Coldwater Ridge. It would take the blast just 40 seconds to cover the distance to David Johnston’s camper. Johnston, who was watching it all, keyed his radio and relayed a message: “Vancouver! Vancouver! This is it!”

Those five words would be his last. His remains were never recovered.

The eruption caused the largest avalanche in recorded earth history and removed 1300 feet from the mountain’s summit. The pyroclastic flow, traveling at several hundred miles an hour (and combined with the lateral blast) leveled 230 square miles of forest, killing 57 people and millions of wildlife.

The ash billowing from the mountain rose more than 80,000 feet into the air, closing down air traffic in the northern United States. Day turned to night in Eastern Washington. Ash fell on the ground as far away as Minnesota and Oklahoma, and over the next 15 days, drifting in the atmosphere, it circled the earth. I was 9 years old that Spring, and I remember ash falling like snow onto the streets where we lived, just outside of Salem, Oregon, 100 miles south of the eruption.

Of the 1500 active volcanoes in the world, about 40 of them sit in the contiguous United States – most of them in the Pacific Northwest – and before 1980, none of them had proved deadly. Prior to March of 1980, Mt. St Helens had lain dormant for 123 years.

That May 18th, she made history.

Although my husband and I have lived in Oregon for a combined total of 61 years (and I really wish I had not just done the math on that), we had never visited Mt. St. Helens. You can see her from almost everywhere in Oregon, on the northern horizon, snowy and distinctive with her flattened top – but big, beautiful, snow-capped mountains are a dime a dozen in these parts. In the decades since her eruption, we hadn’t paid her much mind.

When Mt. St. Helens started acting up again in 2004, our whole region went on high alert. In 2005, when she started spewing out ash and steam, I used to stand outside my office building and watch the smoky plume from across the Columbia River. We thought she might blow again – but after making some noise off and on for the next three years, Mt. St. Helens once more went dormant.

Dan and I thought about visiting her, someday, “when the boys got older,” but after a friend took her small children up there a couple of weeks ago, and came back raving about how pretty it was, we decided to make the trip last Saturday.

By the time we’d gotten a few miles up the Toutle River Valley, I was thunderstruck. Even though it was overcast, and visibility was only a few miles, the scenery was as pretty as any I’ve ever seen – and I’ve been to the European Alps.

After driving some 50 miles off the interstate, we reached the Johnston Ridge Observatory, a multi-million dollar tourist exhibit that sits on the same ridge where its namesake lost his life. When we got out of our van, the air temperature was 44 degrees and a strong wind was blowing. We hurried the boys to the front of the building, which overlooks the valley, but there were so many clouds out, we couldn’t exactly tell where the volcano was.

We went inside and looked at some interesting, interactive exhibits, and then went into a movie theater to watch a short documentary. The movie turned out to be short on eruption info (which is what I was interested in), and long on land-rejuvenation info – but once it was over, the screen rose, the curtains behind the screen parted, and we were looking through an enormous wall of windows. The clouds had parted by now. And there, just five miles in front of us, was Mt. St. Helens. 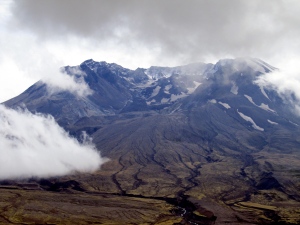 She’s magnificent, people. Unbelievably gorgeous, even with her ripped open flank…maybe because of her ripped open flank, which allows you to see right inside her belly, to the new dome that has been slowly pushing up from her depths. The whole Valley, miles and miles of forested slopes and yellowed plains, seems designed just to frame her, in a spectacular tableau.

While we were there, clouds hung like smoke around her snow-streaked cavities, making it almost seem like she was breathing. Of course, when this creature exhales, the whole world knows it, and when you’re next to her, it’s impossible to forget what she’s capable of.

Still, I fell in love with her, a little. 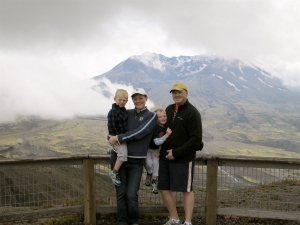 After we’d wandered around the area, snapping photos with the boys (and scouting out a trail we want to hike when they’re older), we drove back down the mountain. We stopped at another tourist center, where you can look through giant telescopes at the valley below, where there is supposed to be a herd of elk (although we couldn’t see any.) We went on a mile-long, secluded hike through the woods, during which I managed to stifle my nervousness about the potential presence of bears and mountain lions. Our littlest pooped out before we’d finished, and rode on his Daddy’s shoulders the rest of the way.

It was a marvelous day.

We stopped for dinner a few miles further down the road, at a converted house overlooking the river, where we were served by friendly mountain folk. We ate seafood and chicken and fries and homemade cobbler with ice cream, and our boys practically licked their plates clean while their Dad and I drank coffee.

It’s as though that majestic landscape was so overwhelming, so full of authority, it’d demanded my full presence and attention. For my particular brain, thinking of nothing, just being present in the moment, is a near miracle.

Do I need to tell you, we’ll be going back?

Note: the photo of David A. Johnston at the top of this post was taken around 7:00pm on May 17, 1980, at the spot where he would die less than 14 hours later. For complete information on Mt. St. Helens, including a far more detailed description of the eruption, visit the Mt. St. Helens website.

And Westerners – I’d love it if you’d share some of your personal Mt. St. Helens memories below!

25 thoughts on “The Mountain”

Leave a Reply to Windows and Paper Walls Cancel reply