I few weeks ago, my Twitter buddy Jay DiNitto told me he’d just published an e-book of Flash Fiction. My first reaction was, “What kind of fiction?”

I’d heard the term before, but had no idea what it meant. I’d certainly never read any. But bring up something I know nothing about, and it’s like waving a pound of catnip above a box of kittens.

So here’s the scoop.

Flash fiction dates at least back to 600 B.C., when Aesop was writing his famous fables (The Tortoise and the Hare, The Boy Who Cried Wolf, etc.) It’s generally considered to be a story of less than 1000 words – but many are far shorter than that.

Perhaps the shortest is a story attributed to Ernest Hemingway (although there is some doubt as to whether the following account is true.) Supposedly, Hemingway was sitting around a table with a bunch of writers, who bet him that he could not write a complete story in six words. Accepting the bet, the great author penned the following line, after which he collected the monies. (Whether this really happened or not, the result is exquisite):

In 2006, Wired Magazine invited scores of published authors to try their hand at a six-word story. You can see the results here. (Some of my favorites? “Longed for him. Got him. Shit.” – Margaret Atwood, and “With bloody hands, I say goodbye.” – Frank Miller.)

I’ve long believed that reading – and writing  – poetry and short stories is excellent practice for every aspiring writer because it forces you to choose your words with the utmost care. (And “rambling” is one of the worst traits of mediocre writing – a trait I am constantly trying to abolish. Every time I sit down to write, William Strunk’s immortal command pounds through my brain: “Omit needless words! Omit needless words!”)

Flash fiction has precisely the same requirement; so I now think that every writer should try their hand at this genre, too.

A lot of flash fiction is pretty esoteric, and because it’s so condensed, a reader needs to give it their full attention. Otherwise, they might not “get it.” (Disclosure: I still don’t “get” some of it. But it sure is fun to read.)

You can download Jay’s book (for free!) here. I’ve asked him to answer some questions about the genre; his answers are below.

And stay tuned to the end of the post, because I want you, dear reader, to come up with – and share – a 6-word story, a la Hemingway. Trust me – it’s fun! And Jay and I will go first. 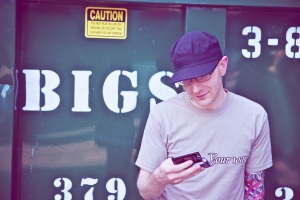 Q. Give us your personal story, written as flash fiction.

I read books like any normal American growing up. I tried my hand at writing early in life and considered myself to be much more clever than my older selves would say. A few clumsy stories and poems were written on word processors that were forgotten with the onrush of technology. Most of the world was spared the narratives.

Years later, after stacks of books all over the world toppled over, I entertained the thought that one more book falling prey to earth’s pull couldn’t harm things. I decided to write my own contribution to humanity’s growing pile of words but reversing my reasoning: existing as an inoffensive presence was the worst thing that could happen.

Q. How did you first get interested in flash fiction?

I started a manuscript for a book a few years back but I had other stories in mind that I wanted to commit to paper/screen. I did some quick Internet hopping and found blogs devoted to flash fiction. I had known about super-short stories back when I was in college and hung with some indie lit people but I didn’t really know the “flash fiction” appellation.

So I basically just started to write and kind of learned as I went along. I’ve written a decent amount but I still consider myself a newbie to writing. It feels strange to be interviewed for this because there are much more qualified writers that can speak on this.

Q. What is the difference between writing a scene, and writing a complete flash story?

I would think a scene is more like a intellectual or sensory phenomenon to be described, like the kinds of things poetry addresses, whereas a flash story has a definite narrative structure, with the exposition, rising action, etc. What I’ve noticed with some flash fiction is that it’s good for extended jokes or puns because you can fit a sort of punchline into such a small space–not like “yuk yuk” jokes but something humorous or an exposition of human folly.

Depending on the author, flash fiction can be the more abstract, poetic kind. It’s brevity lends itself nicely as a tool for a writer to communicate an open-ended, personal experience, rather than a comprehensive plot. But I think the most integral part, if it’s a narrative-style, is to present the reader with a solid story but leave them with a sense of mystery. Let them create the possibilities and connect the dots themselves…like any good story.

Leah Petersen has a great contest every week called #5MinuteFiction, where she gives a keyword and a photo for inspiration. You have 5 minutes to write a story based on the keyword. Then the readers vote on the best story, etc. I played twice. The first time I tied for first and the second I got second place.

I stopped doing it because the contest is run during work hours and I didn’t want to interfere with that, but I loved doing it. One of the stories I wrote there, “Divine Right”, made it to my Bored in the Breakroom e-book, and it’s actually one of my favorites that I’ve written.

Q. I’ve noticed the narrative in your stories has a somewhat formal cadence. Is this typical of flash fiction, or is that simply your particular style?

That’s probably from being soaked in the classics–Dickens, Twain, the Brontes, Chesterton, Bradbury, Alcott, etc.– for a while. When I started writing I wanted to read what everyone thought were the go-to books to reference, as in “foundational” literature. A lot of the older books were verbose because they had to explain scenes in detail. People weren’t as worldly, travel was expensive, and communication was barely past stone age-level. If you want to describe Westminster Abbey to someone who’s only seen the Carolina coastline you’ll need a few pages.

Depending on the setting I just find a more formal tone fits better, like in “The Pennyfarthings”. That was written in the first person, from a British academic’s perspective, roughly turn of the century or so. They’re not going to be narrating in Cormac McCarthy sentence fragments. It’s easy to get carried away with it so I find myself scaling back often.

Q. I’m always interested in writer’s schedules, especially when they have other full-time jobs. When do you find time to write?

I find time wherever I can: on lunch breaks, on the bus, when everyone else is asleep, when I should be asleep. It can be hard sometimes but it helps to think of yourself as a body of water that spills all over the place…water will find cracks and holes to dip into by its nature. Gravity does its work and you’ll uncover little pockets of time to write if you have the drive and disposition to look for it.

I’ve been told it helps immensely to stick to a schedule but I haven’t done that yet. I could if I really tried, but I have a newborn with an odd notion of sleep patterns on my hands right now so things will need to settle with that before I get a solid routine down.

He gave up before she did.

Have you ever read or written any flash fiction? And go ahead – give us a 6-word story!

36 thoughts on “Fiction in a Flash”