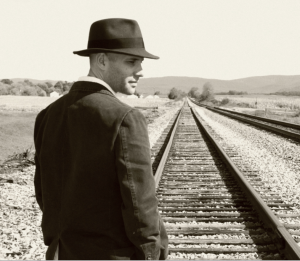 We’re back! My book has now gone to the printer (much more on that to come), so I am able to resurrect my blog in the best way possible, by talking about a terrific new book. Billy Coffey has just published his fourth novel, The Devil Walks in Mattingly, and it is his best yet. In fact, this is the first book of his that I’ve given five stars to, on Goodreads (and that was certainly one of my most convoluted sentences).

Like the great Rick Bragg and the late, great William Gay, Billy is a southern boy who has a magical gift for storytelling. He’s also the hardest-working writer I know, and if he’s not really famous some day, I’ll eat my hat.

(Inasmuch as I don’t wear hats, this is not much of a promise. But still.)

Once again, Billy was nice enough to stop by and talk to me about all sorts of nerdy things. It might literally be the best interview ever. Except for the fact that I somehow failed to work Benedict Cumberbatch into the questions.

This novel has shades of Southern Gothic. Who’s your favorite writer in that genre?

All fiction writing begins and ends with Flannery O’Connor.  She was fearless, she was faithful, and she had the best style and tone of anyone I’ve ever read.

Regret and hope are twin themes in this book (as they are in life). Emily Dickinson said “Hope is the thing with feathers / that perches in the soul / And sings the tune without the words / and never stops – at all.” Regret can swallow decades, even whole lifetimes…but hope, I think, is the more relentless of the two. Your thoughts?

I would agree with that. I don’t think anyone ever chooses regret, it’s just one of those things that happens to us all. What we choose is to allow it to swallow us whole–we decide that what was will affect what is, and therefore what always will be. I’m a big believer in the human capacity to screw up something wonderful, but I’m also a big believer in the human will to make that something better afterwards. To make amends. But hope? Hope chases us. I believe that, too. Hope is that thing that won’t let us go. We can survive without a lot of things, but never that.

If you could make everyone on earth read one book, besides the Bible, what would it be?

The Brothers Karamazov. That was the book that made me understand what a novel could be. Everything is there—history, theology, philosophy, psychology, all in a single story. It’s the greatest novel ever written.

I first read that book at about age 15 – I reread it in another translation several years ago. The Grand Inquisitor chapter is just…everything. Okay, what word grates on your nerves most when it’s misused in discourse? (Mine would be “literally.”)

“Literally” would have to be my pick, too. It’s literally the most misused word in discourse. And I really have a problem with people who mispronounce “supposedly.” Supposably, it happens a lot. That literally gets on my nerves.

Two books you read within the last year (besides yours and mine, naturally) that blew you away.

Life After Life: A Novel, by Kate Atkinson, and The Goldfinch, by Donna Tartt. Both of those novels blew me away. Amazing, amazing stuff.

If you received a two-year grant to write a literary history of any building in the world, which would it be?

Sloppy Joe’s Bar in Key West, Florida. Because Hemmingway. And because Key West. Both are amazing places. I spent a week in Key West once. It was the only time I never missed the mountains.

Monticello would be a close runner up. I go there at least once a year. It’s magical, standing there looking at Jefferson’s books and desk.

Sometimes I’ll read one of your sentences and think “dang!” And then I’ll have to read it a few times. Do you ever do that about one of your own sentences? Or what was your favorite sentence in The Devil Walks in Mattingly?

I don’t think I’ve ever done that with one of my sentences. Other people’s, absolutely. Never mine. With mine, I could have always made it better.

I don’t know that I have a favorite sentence from Devil. The one that stands out at the moment is Justus saying that Jake’s kindness was “panic without teeth.” I’ll admit to grinning when I wrote that.

Your last supper on earth?

A burger and fries from Five Guys. You don’t have Five Guys out in the great Northwest, do you? That’s a shame. If you’d eat one, you’d pack up and move here ten minutes ago.

No, we have Five Guys! But my heart belongs to In-N-Out…which we do NOT have here, despite online petitions that I may/may not have participated in. Moving on now – Doctor Who shows up and offers to take you in the Tardis to the destination of your choice: to any point in past history, OR 100 years into the future. Do you choose the past (and if so, when), or do you choose the future? Why?

I’ve never been much on the future. I suppose I’ve been coerced by The Walking Dead and all those dystopian novels, but I have serious doubts we’ll end up growing into some idyllic Starfleet future. Give me the past. I don’t want to know what’s coming. I’d rather it be a surprise. And give me a time way, way back. Give me pre-history. I read recently that archeologists found traces of a lost civilization in the Sahara that stretches back thousands of years before the Egyptians, and there are hints that they were just as advanced. Can you imagine that? We think we know so much about what’s happened. We know nothing.

I watched something on NatGeo a while back about the Shroud of Turin.  I freaking love the shroud of Turin. I have no idea what it is, but I laugh every time someone has some new theory about how that image was imprinted on that piece of cloth and that theory turns out to fall apart. Plus, for an hour I got to feel like Indiana Jones.

What’s one highly acclaimed book that everyone else seemed to love except you?

How about Steig Larsson’s books? Never could get into those.

Mine was One Hundred Years of Solitude. I read it, and didn’t get it AT ALL…then again, I don’t like magic realism. Which story genre are you least likely to read?

I’m an eight-year-old boy when it comes to romance novels. The book covers always look scary to me, and I can’t seem to help but wrinkle my nose and go, “Eww, gross.”

I just finished my next novel, titled In the Heart of the Dark Wood. It picks up where When Mockingbirds Sing left off and centers upon Allie Granderson from that book and Zach Barnett from The Devil Walks in Mattingly. It’ll be out in November.

I’m really stoked that we only have to wait 8 months for Billy’s next book! You can read the first chapter of The Devil Walks in Mattingly here. And then download the whole thing or order a hard copy here, or pick it up in your favorite bookstore. Seriously. Go on.