I apologize – you’ve been misled. The title of this post is not The Year in Cool; it’s actually (in the spirit of Christmas) The Twelve Days of Physics.

But if I’d said that up front, one or two of you wouldn’t have even stopped by. So, a little subterfuge for the greater good? When the good is this great – heck, yeah.

Here are 12 of the coolest things that captured my attention this year and I promise – you won’t break a sweat or a nail, reading about them. (Click the embedded links for more information on each topic.)

Learn something new! Impress your friends! Get ready to have your world rocked, baby.

This guitar was created (way back) in 1997, but I just read about it this year. So I hope you’re not relying on me for all your breaking science news. Anyway, apparently, while I’ve been busy baking cookies and checking my email, scientists have been busy making things out of atoms. As in, manipulating atoms and crafting things out of them, like an atomic abacus or, I don’t know, a six-string guitar that is the size of a red blood cell.

Wanna see how small that is? Check out this killer link, which shows lots of tiny items in proportion to even tinier items. (Please note: even the original view has been magnified.) You can’t see the red blood cell from here. You have to zoom way, way in (using the slider right underneath the graphics) to get to the red blood cell.

That’s the size of this guitar they’ve made. And yes, it can be played. But no, not by your fat fingers.

2. CONFIRMATION OF THE SPACE/TIME VORTEX

Yes, Virginia, there is a space/time vortex around Earth – and, after an impossibly cool 47-year experiment, NASA scientists confirmed it just this last Spring. Nutshell: ever since Einstein, physicists have suspected that the fabric of space consists of four dimensions, not three (don’t bother trying to realistically visualize space/time…even Stephen Hawking says it’s impossible), and that the mass of large objects that sit in space (such as planet Earth), warp the space around them, like a bowling ball resting on a soft mattress.

In order to prove this, NASA scientists had to create four gyroscopes that were perfectly round down to the atomic level, then send them into space on a drag-free satellite that was impenetrable by Earth’s magnetic field, then measure the spin of the gyroscopes without touching them.

You know, just the sort of thing we all accomplish before breakfast. (If you’re at all geeky, read the article. I adore every little thing about it.)

This year, scientists made my decade when they announced that time-travel was back on the theoretical table (okay, what they really announced was that they had made a particle move faster than the speed of light, which is one of the requirements for time-travel. Potato, pa-tah-to.) Then, a few weeks later, they broke my heart when they announced that the “results” were probably due to a calculating error. THEN, two months later, they said no, they HAD broken the speed of light again. Then, a couple of days after that, they threw up their hands and said, “Heck if we know.”

Dudes. You can’t mess with people like that. I think we all know who’s going to be on Santa’s Naughty List this year.

For decades now, every physicist, Trekkie, and space cadet worth their salt has looked into the future and seen one Holy Grail: interstellar travel; as in, to the stars. A few weeks ago, NASA and DARPA wrapped up a year-long study aimed at formulating a business plan for the “100 Year Starship” – a program geared towards having a working starship 100 years from now.

Of course, there are a million obstacles to such a plan, not the least of which are the very prohibitive distances involved – even if we could develop nuclear pulse propulsion and travel at, say, 5% of the speed of light, it would take 85 years to reach the nearest star. Which would mean we’d have to send a self-sustaining human colony. Which would, obviously, never return.

5. A SHORT HISTORY OF NEARLY EVERYTHING

If you’re not really “into” science, but guiltily feel you should know more about it, this book by Bill Bryson (yes, the travel writer) is for you. First of all, Bryson is a riot – no author makes me giggle more than he does – and he makes science funny and fun. But he’s also done an incredible amount of research, and his deep love for science is absolutely contagious. I keep meaning to do an entire post on this book. I love it.

(Note: Bryson is not a creationist, so a few chapters contain conclusions, or maybe I should say “conjectures,” that do not fall in line with Christian beliefs. This shouldn’t bother anyone who can formulate their own theories based on facts. I have yet to read any scientific facts that disprove my personal beliefs. Quite the contrary.)

Just when you thought astronauts couldn’t possibly get any cooler, they go and do something like this (click these words to view the video.)

7. NUMBER OF STARS IN THE UNIVERSE

We all know by now that the universe is far, far larger than we can wrap our puny little minds around…full of more planets and stars and entire galaxies than we’ll ever accurately measure.

Last December, astronomers discovered that several far-away elliptical galaxies are much denser in “red dwarf” stars than our own galaxy is – which tripled the estimated total number of stars, to as many as 300 sextillion (that’s 3 trillion times 100 billion, if you’re having a little trouble carrying the zeros.)

Of course, the icing on the cake is: more stars = more potential planets. And we all know what that means.

E.T….can you hear me? Speaking of which…

Three months ago, European astronomers announced they’d pinpointed a bunch of new planets, including 16 “Super Earths,” including one in the Vela constellation which may have water and a similar temperature to our Earth; which means it could be habitable…Yay! Oh, except, it’s 35 light years away – and one light year equals 5879 billion miles, so…shoot.

Not to be outdone, last week NASA scientists announced they’d found a new solar system (Kepler-22) which contains a planet that is even more like Earth (with a 290-day year! A balmy 72-degree climate!)

Except…this new planet is 600 light years away from us. Confound it all! Can’t an astrophysicist catch a break, around here? Where are we on that starship?

9. HOW FAST CAN HUMANS RUN?

The current world record holder in the 100 meters, the flamboyant Jamican runner Usain Bolt, has run at a top speed of just under 28 mph. Recently, I wondered: what’s the threshold? I mean, a human body, under its own power, is never going to travel 100 meters in one second – so what exactly is the absolute limit on human speed?

In January of 2010, the Journal of Applied Physiology published this fascinating study (which I confess I haven’t read in its entirety, because right now it’s late at night and after looking at about the fifth consecutive page of algebraic equations, my brain curled up into a ball and started sucking its thumb.) But bottom line: by factoring in the maximum force sustainable by human limbs, the minimum possible foot-ground contact, the length limitations of human legs (which are too short to gallop), and the contractile speed limits of muscles (yada yada), researchers determined that, unless Dr. Frankenstein starts fiddling around with genes in a lab, human beings will never run over 31 mph.

Of course the great thing about physics is that, given enough time, the impossible often becomes possible. (I’ll take Roger Bannister in the mile for 3:59.4, Alex.) Speaking of impossibilities…

I recently picked up Dr. Kaku’s book Physics of the Impossible and was instantly (naturally) hooked. That book explains whether (and how) various sci-fi staples, such as force fields, invisibility cloaking, and teleportation, are possible, according to the known laws of physics.

Here’s why Kaku made my list: in my opinion, he explains physics as simply as it can possibly be explained. I’ve read Hawking and Greene, and love them both, but while reading their books I often have to go back over a passage again and again, to grasp a particular concept. Kaku is much easier to understand. (And a friend who’s read his other books assures me they’re all great.)

Plus, the good professor geeks out about Star Trek. I mean, c’mon, right?

Okay, I’m blatantly cheating with this one – I didn’t run across it in 2011. I actually learned about Q.C. right before my first child was born, when I read The Code Book by Simon Singh, a world’s history on the science of code-making.

Traditional cryptography, the “coding” process used to secure data, is flawed, in that any code can theoretically be cracked (even if, as with current technology, that process would take, quite literally, a trillion years.) Several years ago, scientists figured out how to use photons (mass-less light particles) as encryption keys. Since photons move in waves, their motion is unpredictable – meaning any photon used as a “key” would be unbreakable, for an “eavesdropper.” (Read about how it all works here.)

Of course, scientists being the madcap kids that they are, a short time after quantum cryptography had been invented, researchers at MIT announced they’d figured out how to guess the direction of a photon’s spin by measuring other photons it’d become entangled with, without affecting the original photon – which might render the quantum code breakable, after all.

Or, maybe. But really, what do they know?

12. OH, HECK…PHYSICISTS IN GENERAL – THE WHOLE DANG LOT OF THEM

I was reserving this last spot for the famous (theoretical) Higgs boson, about which we were supposed to get some sensational news yesterday. But when CERN scientists held their press conference, rather than stating that they’d found the so-called “God Particle,” they announced that…well…er…they were closer than ever to hunting it down. 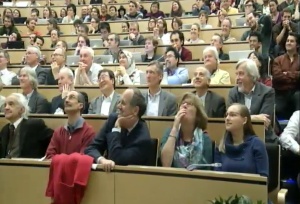 Anyway, during the news conference I stumbled upon the “Quantum Diaries,” a collective blog written by particle physicists from around the world. They were live-blogging the Higgs boson event – and they could not stop using lots of exclamation points! About the speakers! And their roles in this work! Because it must be nerve-wracking for the speakers!

And then last night my brother sent a link to these guys, who created a camera that captures a trillion frames per second (never mind that it took two of my brother’s friends to explain the process to me.) Read the head researcher’s short-bio here, which is hilarious (and Dr. Raskar, if you’re reading this, I’ll have you know that I ran 3 miles last night. Without stopping. So you’re not the only one who can, you know…do cool things. Also, I just found your Facebook page, so…friend me!)

And I realized once again: I just adore every one of these people. They love physics the way Po (the movie panda) loves Kung Fu – with unrestrained delight. And that is utterly delightful.

In fact, had I discovered in my 20’s how cool science was, we wouldn’t be having this conversation right now, because I’d be ensconced in an astrophysics lab somewhere, happily naming stars after myself.

And on that note, I’ll reluctantly conclude the most fun I’ve had all year. Not even kidding.