Hollywood has a long and fruitful history of making disaster movies that feature large quantities of humans being wiped out by “off-planet” forces: asteroids, solar flares, aliens, and so forth. From Armageddon to Deep Impact to War of the Worlds to Independence Day, we eat this stuff up like candy.

So how many people in history have been killed by space matter or aliens?

None. (Well, there was a dog that was allegedly killed by a meteorite in Egypt in 1911. But the single eyewitness account was pretty sketchy, so the story is considered to be the Egyptian version of crop circles, or Bigfoot.)

How about people being killed by events originating from this volatile, molten planet we live on? Well, last year alone, the figure was over 250,000.

You’d think we would have examined this place a little more closely.

So how far have we delved into the ground that we walk on each day?

We all remember that the Mariana Trench, in the Pacific Ocean, is the deepest place on earth: 6.8 miles down. Sounds intriguing, right?

In 1960, two Navy sailors traveled to the bottom of the Mariana Trench in a submersible. They stayed there for 20 minutes, peering through a single, tapered Plexiglas window at the murky water outside, and then they kind of shrugged their shoulders and rose back to the surface.

No human has been back to the Trench in the fifty-one years since.

Ten years after the Mariana Trench expedition, Soviet scientists decided to see how far they could go into the earth. They drilled and drilled and drilled, and this is a good place in the story to go make yourself a sandwich, because they kept drilling and drilling until, thirteen years later, they reached a depth of 39,000 feet, at which point they stopped operations for a year to “celebrate” (which, one dearly hopes, translates to “drinking large quantities of vodka on a sunny beach in Fiji.”)

And then they got back to business, and drilled with admirable tenacity for another eight years, at which point the working temperature was 356 degrees and they realized that in another 9000 feet (give or take), it would get so hot that no drill bits on earth would function. So they stopped.

After nearly 22 years of drilling, they had reached a final depth of 7.6 miles, and that’s as far into our globe as mankind has ever gotten.

Here is a diagram of the earth. See that paper-thin outer layer, the crust? 7.6 miles – the farthest we’ve ever gone, remember – only gets you 1/3 of the way into that tiny layer. 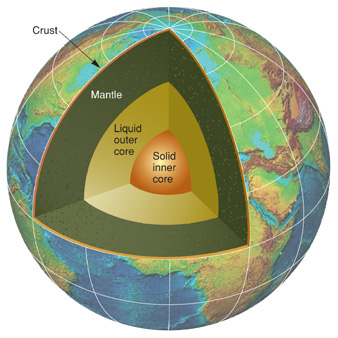 In recent years, Hollywood has paid a little more attention to home-grown disasters, as in the movie 2012. I wonder how many people who saw that movie realized it was partly based on a real geological concern: the fact that Yellowstone National Park is perched on top of the largest “supervolcano” in North America, which is overdue for a “supereruption,” which is a lay-term (and I’m not making any of this up) that signifies an extinction-level event.

The fact is, with most natural disasters that come from the atmosphere, such as hurricanes or tornados, we have gained enough knowledge to build instruments that buy us at least a small window of warning. But when it comes to earthquakes (and their subsequent tsunamis), as we’ve seen so tragically in the last year, we are utterly helpless.

Turns out, the Great Unknown is right underneath our feet.