I am the most voracious reader I personally know. And I married a man who doesn’t read.

Oh, he’s perfectly literate – he just doesn’t enjoy reading. At all. He is the kind of person who would rather have a so-so adventure, than read about a fantastic one.

This is understandable, once you know his history. He spent his childhood crisscrossing America in the back of his family’s tour bus, while they sang in churches and earned a living doing manual labor wherever they landed. At the age of eight, he worked in silver mines in Arizona, alongside his Dad and brothers. He became the family’s drummer when he was nine, and recorded his first studio album that same year. While other kids were learning about geography in a classroom, he was visiting the Grand Canyon and Yellowstone and the White House.

He lived at a logging camp for a while, where the camp manager taught him to fly fish in the mountain streams of Idaho. His family spent a year on the Indian reservation in Lame Deer, preaching and playing music for the natives. They put on winter revivals in Browning, Montana, because you can get a good turnout when the temperature dips to 40 below – evidently cold townspeople are always eager to gather in a warm place. On an Indian reservation in Arizona, when he was a teenager, he learned to shoot an M16 and an Uzi.

Well, you can see why he didn’t have his nose stuck in a book, back then.

I have often read of literary couples that sit side-by-side in easy chairs, exchanging manuscripts or reading aloud to each other when they come across a particularly lovely passage. Many writers even marry other writers: Stephen King’s wife is a published author. So is Pat Conroy’s. E.B. White’s wife was a highly esteemed editor. At the very least, most authors can use their mates as their “ideal first reader,” that trusted person who can pore over drafts with a finely-tuned eye, looking for clunky dialogue or X-ing out egregious adverbs.

I don’t have that, in a spouse, and probably never will. My husband has read exactly one novel, in all our years together – and he liked it very much, but one was plenty for him. He tried to read my blog once or twice, but said it was “wordy.” (Ahem.)

Still, the man has never complained about the over-flowing bookshelves in our home, or the ever growing stacks of reading material that seem to sprout up around me. Sometimes, on moving days, when he has to pick up box after heavy box of books, he sighs; but that’s the extent of it. On my birthday, or at Christmas, he always asks for a list of new books I’d like. My husband has accepted my obsession from Day One, even though he doesn’t share it.

Sometimes I find myself wishing he loved books, just a little.

As I write this, my man is in the backyard, building a playhouse for our boys out of an old doghouse, some 4X4 posts, and a section of T1-11 that he pulled off the neighbor’s house when he replaced some siding for her. He can build, or re-build, anything composed of wood and nails, or metal and grease. He excels at every sport he decides to try.

He can listen to a piece of music and determine if a singer is slightly flat, or if the guitar track is mixed really well. He finds harmony parts better than I do. He cooks gourmet burgers that are so out-of-this-world, they have spoiled me from ordering hamburgers at restaurants. He cultivates a garden in our backyard each summer, and whips up salsa from scratch when the tomatoes and peppers and onions get sweet and ripe. He takes photographs that people would probably pay money for, if only we could afford to get him a better camera.

Aside from that missing literary gene, he is a Renaissance man in every sense of the word.

This man will ensure that my boys have lots of real adventures: places for their legs to go, things for their hands to do. There will be fishing and camping trips and train rides and kayaking. They will tinker with engines and build things from scratch, and they’ll learn how to cook burgers that taste so good, their Mama will cry. 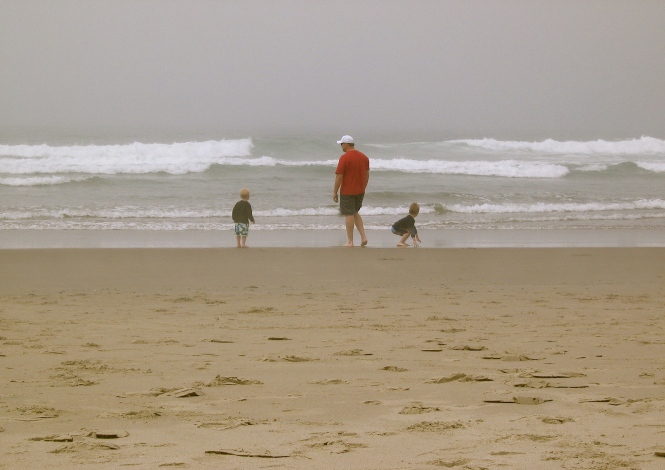 For my part, I have given our boys a love of reading, which makes me as happy as anything I have accomplished thus far. At least twice a day, I sit down and say those magic words “Do you want to read?” and they come running as fast as their little legs can carry them. They snuggle up with their blankies, one on each side, and we sail away together on pirate ships, or visit magical candy shops, or follow talking rabbits down holes. Some of my own favorite childhood books are waiting for them, high on a shelf for now so their old spines aren’t damaged by toddler hands.

Our boys, God willing, will have the best of both worlds, the real and the make-believe.

My husband and I celebrated our 21st anniversary last August.

My non-reader suits me – suits us – just fine.

17 thoughts on “So I Married a Non-Reader”