Mercifully (for her, for us), Kate Gosselin has mostly disappeared from the weekly covers of the tabloids. For a while there, it seemed as if Kate and her reverse mullet were going to be with us until the Lord returned.

A couple of months ago, I checked out the first season of “Jon & Kate + 8” from the library. I can see why people watched the show – it was fascinating, but also, it makes you think to yourself, Hey, I don’t have it so bad! I can handle two toddlers, easy-peasy! Say what you will about Kate (and there is plenty to say); there are very few women who could manage to care for two toddlers and six babies at the same time, few people who could keep things organized and keep everyone fed and clean, without losing their own minds.

Of course, one can easily raise objections to the very idea of putting children on display like that. But the Gosselins were not the first (or the most egregious) example of the media (and people’s curiosity) exploiting a set of multiples. That sad distinction belongs to five sisters who were born in a snowy hamlet in Ontario, in the middle of the Great Depression. Their survival was a miracle; their lives were a tragedy.

In late 1933, a 25-year-old farmwife became pregnant for the seventh time in eight years (a thought, by the way, that just clobbers me.) This time, Elzire Dionne suspected she was carrying twins, but when she went into labor in May, two months early, her doctor delivered five identical baby girls. Combined, they weighed less than 14 pounds.

The odds of conceiving quints naturally is 1 in 65 million (it’s probably less for identicals, but I couldn’t find the stats.) In 1934, there were no NICU’s – and there were no known cases of quints surviving, ever. The Dionne’s doctor wrapped the tiny babies in old napkins, placed them on a corner of the bed, and waited for them to die.

Unbelievably, the babies lived. They were kept in a wicker laundry basket next to the stove, and fed water and corn syrup. Once newspapers got wind of the story (“World’s First Surviving Quintuplets!”), it spread across the globe. The new babies were an international sensation.

Within four months, the government of Ontario had declared the Dionnes to be “unfit parents” (but only for the quints, evidentally), and took the babies from their parents. For the next nine years, the Canadian government turned the girls into Ontario’s biggest tourist attraction. 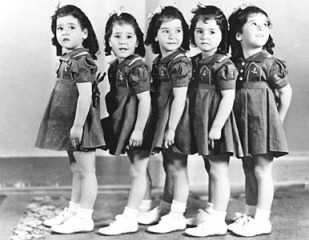 A large compound was built across the road from the Dionne farmhouse and was opened to visitors. The babies lived there with a doctor, some nurses, and a handful of policemen. Their playground was a “public observation area” where, eventually, 6,000 people per day filed by to gawk at the girls. Their mother (who had three more babies after the quints) ran a souvenir shop on the premises, selling cups and postcards and candy bars covered with pictures of her daughters.

The girls were required to follow a strict schedule, and were regularly subjected to inspections and testing. They were used to sell a wide variety of popular products, and were featured in several Hollywood films. Hollywood celebrities filed by, along with the masses, to stare at the girls.

Their compound, dubbed “Quintland,” was surrounded by barbed wire.

When the girls were nine years old, their parents won back custody, but the fractured family found it impossible to mend itself. The girls were unhappy and felt isolated, and they left home at eighteen, severing almost all contact with their family. One of the sisters died two years later, after entering a convent. Another one died at 35. The surviving sisters wrote a scathing book about their ordeal. Two sisters are still living today.

The comparisons between the Dionne sisters and the current rash of mega-family media darlings are obvious and easy to draw (although by any measure, the Dionne case was the most extreme, and the most tragic.) But all of this makes me think about the much broader issue of “celebrity,” that monstrous sub-culture we have created.

Human beings who accomplish or produce monumental things are legitimately famous (or infamous.) People who are known simply for being born, or because of how they behave, are spectacles.

In the Dionne’s case, what is so appalling is that those girls had no say in the matter – they were victims in every sense of the word. In today’s world, however, there are masses of people who make spectacles of themselves, in order to be famous – famous for, um, making spectacles of themselves. (As a naturally shy person, this concept just confounds me to no end. I don’t want anyone staring at me. Pretty much ever.)

Look, no one is more curious than I am. I understand the fascination with sociology, with anomalies. Here is the problem, though, with the slippery slope of curiosity: when we train our attention on something, we begin to consume it, to use it up, whether that thing is a book or a snowboard or a meatball sandwich. Or a person.

And human beings were never intended to be feasted upon.

I am no preacher, but here is what I would say to those who would be famous, those individuals who are yearning for attention: Go out and do something, or say something, or write something, or make something. We all cling to the surface of the same earth – by God, contribute something while you’re here. Your life is too valuable and too unique and too vital for you to just stand there, absorbing stares. You are not a tree, or a mountain range, or a sunset, or a shooting star. You are something infinitely more precious. You are flesh and blood and bone and spirit and soul and laughter and sorrow and love and rage and tenderness and joy and determination the likes of which the natural world can only dream of.

You were not created to be a spectacle.

Those were the Dionne girls’ names.

Just thought we should know.